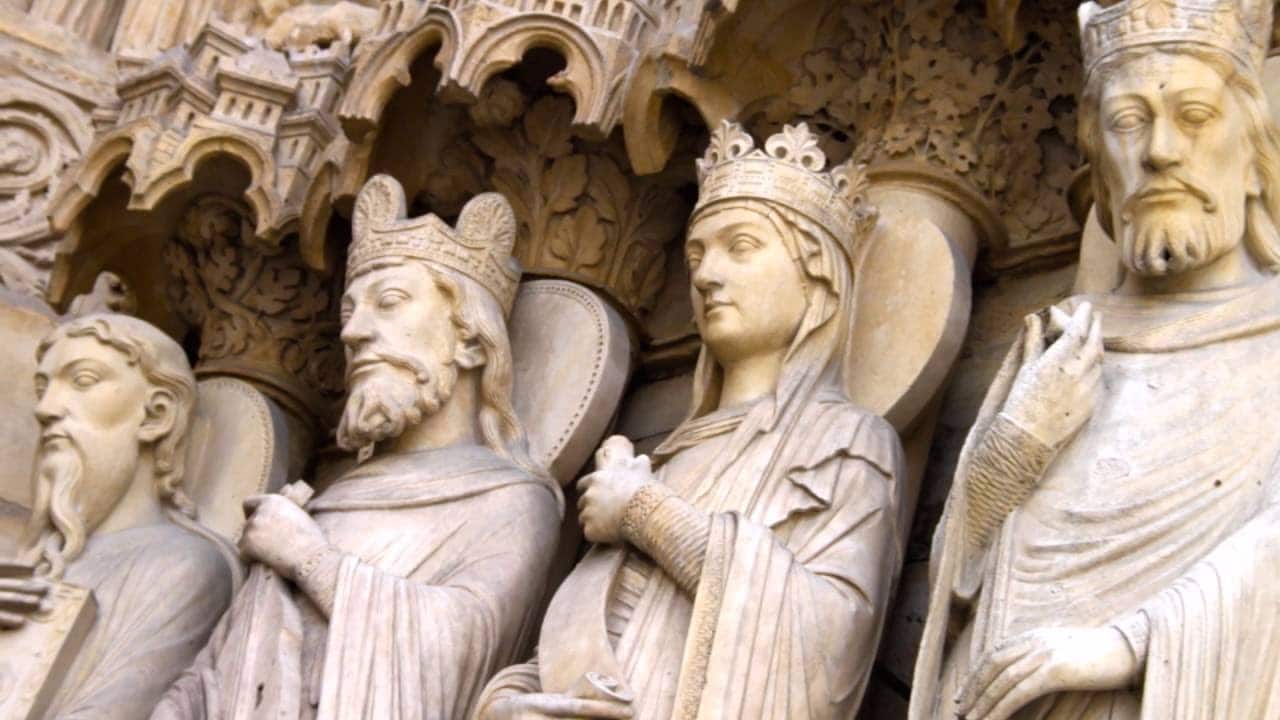 To define Gothic art is a complex undertaking, so diverse is the geographical and chronological reality that it covers, from the mid 12th c. to the Renaissance. It was precisely at the Renaissance that the term appeared, to express the disdain felt in those times for forms considered as barbarous as the Goths to whom their imaginary paternity was attributed.

Gothic art was born in the Île-de-France, a region that had previously been less conspicuous than others for its artistic inventiveness, but which then profited from the establishment of Capetian power and its centralizing tendencies, from peace and returning prosperity, in a place that became the commercial and intellectual crossroads of Europe. With the birth of the university, a lay education developed, in which the desire for an encyclopedic knowledge replaced the former meditation on sacred texts, theology rediscovered Greek logic and abandoned the monasteries for the debates of the towns, and literature opened itself up to the vernacular tongue, courtly love and Nature. 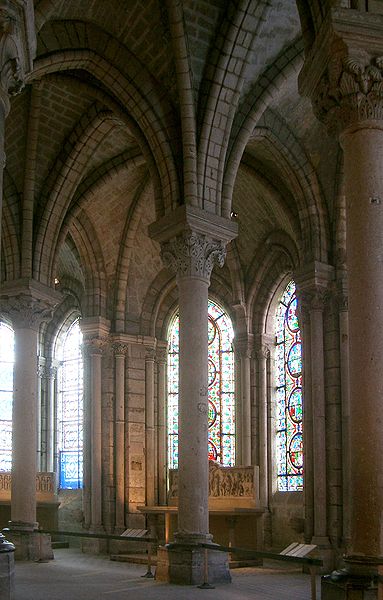 Among the initiators of the new artistic current was the abbot of Saint-Denis, Suger, who found in his reading of Pseudo- Dionysius the inspiration for an aesthetic marked by a fascination with light and the hierarchy of forms. Thus in 1140, he rebuilt his abbey church, breaking down the divisions between the radiating chapels, which threw the light of their windows onto the choir. This conquest of light was underpinned by architectural techniques ceaselessly perfected: intersecting ribs to lighten the vaults and better distribute the thrusts, the pointed arch, whose effectiveness was quickly seen by the rational spirit of the Cistercians, flying buttresses, which allowed the hollowing out of walls and the opening up of large windows.

The first experiments were carried out in a fever of emulation: at Sens, from 1140, the sexpartite vault was combined with alternation of strong and weak springing on the pillars, as at Notre-Dame, Paris (1163); Noyon (1150–1235) inaugurated a quadruple elevation – arcades, tribunes, blind arcading, and high windows; at Chartres (after 1194) the adoption of a quadripartite vaulting and the disappearance of tribunes marked a decisive step forward: it determined the structures of Reims (finished in 1275) and Amiens, which marked the apogee of the rayonnant style. But at Beauvais in 1284 the collapse of the vaults of the choir punished the excesses of an ever more vertiginous search for verticality. After 1260 activity shifted towards the East ( Metz), Normandy (Saint-Ouen at Rouen), Burgundy and the Midi ( Narbonne, Clermont-Ferrand, Limoges, Toulouse). There, churches with a single nave were often preferred. After a period of latency, in the early 14th c. Gothic became flamboyant, with exuberant decoration on the outside and a new monumentality on the inside (Saint-Séverin and Saint-Germain l’Auxerrois in Paris, basilica of Saint-Nicolas-de-Port).

These new architectural forms found varying expressions in Europe: England, where intersecting ribbed vaults had become general from the late 11th c., at Durham, then at Peterborough and Gloucester, preferred compartmentalized plans to the French unification of interior volumes, while retaining at Canterbury a model based on Sens. Soon its originality showed itself in forms called “decorated”, at Wells (from 1185) or Lincoln (c.1192). The inventiveness of artists was deployed in spectacular systems of vaulting (transept crossing at Ely) which led in the mid-14th c. to the style called “curvilinear”, whose effects of curves and counter-curves were later contradicted by the perpendicular style, which allowed the opening up of immense bays (Gloucester). 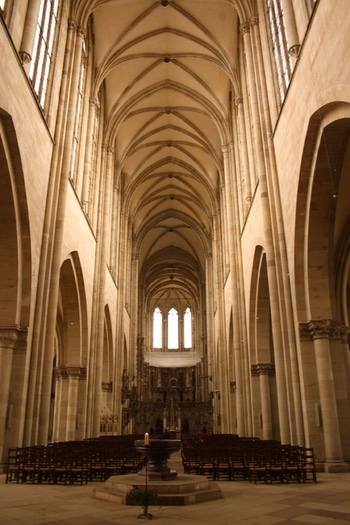 One of the first buildings of German Gothic was Magdeburg cathedral (1209). Opus francigenum penetrated local traditions, asserted itself in the nave of Strasbourg (1240), and found new formulations at Cologne, Halberstadt or Ratisbon. The Cistercian spirit had been determinative for the building of hall-churches, of which the nave of Marburg is a fertile example, and which was the manifestation of German originality: there, in an edifice of rectangular plan, without ambulatory or transept, the central body and side-aisles culminate at the same height.

In Spain, Gothic was at first indebted to France, as at Toledo, Burgos or León. But it asserted its autonomy in the choice of volumes simplified with the help of single naves.

In Italy, the influence of the mendicant orders determined the development of Gothic architecture as in the upper basilica at Assisi (consecrated in 1253) and the Umbrian area generally, though Romanesque resistance was still vigorously manifested, as at Siena cathedral or at Sant’Antonio in Padua (1236–1270). In Italy, architectural works in the pure Gothic style were rare and later than French models; Cistercian architecture had better luck, as in the abbeys of Fossanova, Casamari and San Galgano.

These new definitions of space had enormous consequences for decoration. The window, which had the complex task of illuminating as well as decorating, supplanted mural painting. Stained glass became a major art which, in the 13th c., conditioned the graphic and chromatic choices of the other media. After the success, e.g. at Chartres in c.1200, of bays divided into a multitude of historiated panels, and then the alternation of tall colored figures standing out on a grisaille background (Saint-Urbain at Troyes, c.1270), the evolution of architecture led in the 14th c. to the employment of silvered yellow and engraved glass, which allowed subtle colour harmonies.

One of the most obvious manifestations of the Gothic spirit can be seen in the ambo of Klosterneuburg (1181), where Nicholas of Verdun renewed in Enamel the antique forms of deep, supple draperies, easy movements, and clear logical structures, translating an erudite and systematically organized thought. More than other arts, that of goldsmiths’ work served the taste of a society that was becoming courteous and mannerist ( châsse of St Taurinus at Évreux, 1240–55), before being renewed by the technique of cloisonné enamel on gold and of translucent enamels ( corporal of Bolsena in Orvieto cathedral). 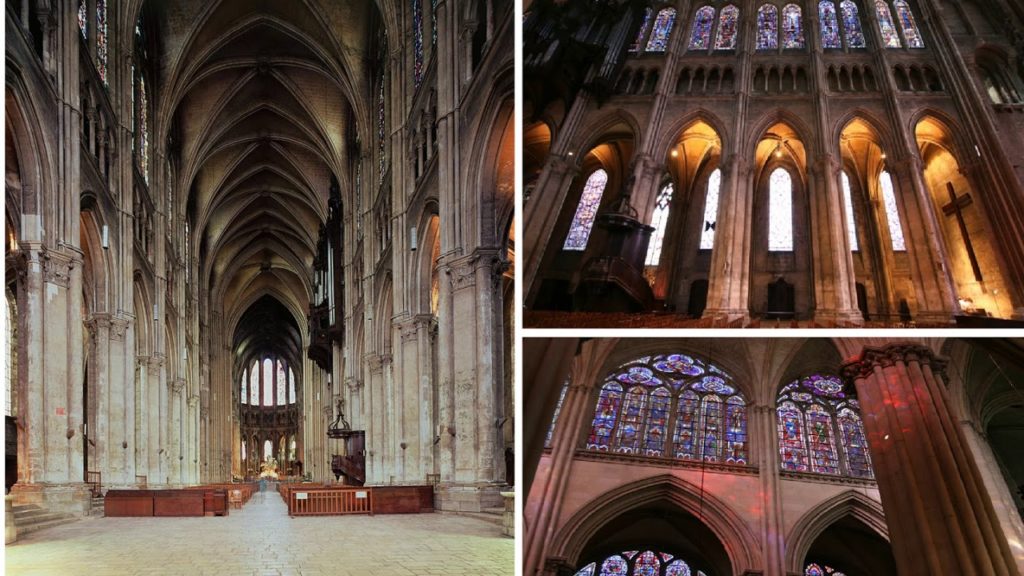 Illumination continued to attract the most prestigious artists. The crusades gave them a better knowledge of the Byzantine style which nourished the renaissance of the 1200′s, e.g. in the Psalter painted for Queen Ingeborg. The precise and mannered drawing style of the time of Louis IX contrasts with the harsher forms of German painters, on whom the Romanesque heritage left a lasting mark. Italian artists preferred painting on wood and in fresco, rather than illumination. They displayed their autonomy from the time of Cimabue and especially Giotto (1266–1337), who freed himself from Byzantine influence to rediscover the values of Latin monumentality: his taste for architectural and natural spaces, conveyed on a simplified palette, and his knowledge of bodies and faces combined with the Franciscan spirit to announce a new Humanism. This spectacular Italian renaissance fertilized the art of Europe when Jean Pucelle borrowed its perspective, or when Simone Martini and Matteo Giovanetti went to Avignon to work on the decorations of the papal palace. It was then that the conditions for an international style came together: from Paris to Prague, from Flanders to Spain, an ever more realistic vision of life led to the emergence of Flemish art, in which devotion and the expression of the true was served by the technique of oil painting, where the superimposition of coats of transparent varnish undertook to make the inner world glow. Thus the brothers van Eyck, Rogier van der Weyden, and Hans Memling, who, at the dawn of the Renaissance, preceded Dürer’s attempted synthesis of Nordic attention to minute detail and the Italian sense of space.

The evolution of sculpture led from the statue-columns of the first Gothic portals, where Biblical heroes were set in architectural monumentality, to the bourgeois portraits of the waning Middle Ages. It is the history of patient emancipation, helped by the observation of antique examples, from architecture and from a mystique of eternity. From the childish grace of the angels who awaken the Virgin on the portal of Senlis (1175–85) to the tragic power of the prophets who surround Klaus Sluter’s “Well of Moses” at Dijon, it was humanity that awoke in stone. And this stone was now able to express the sweetness of life, and above all the sadness of death: because it was to the sculptor more than to other artists that funerary art, so important in that age obsessed by suffering and death, was entrusted.