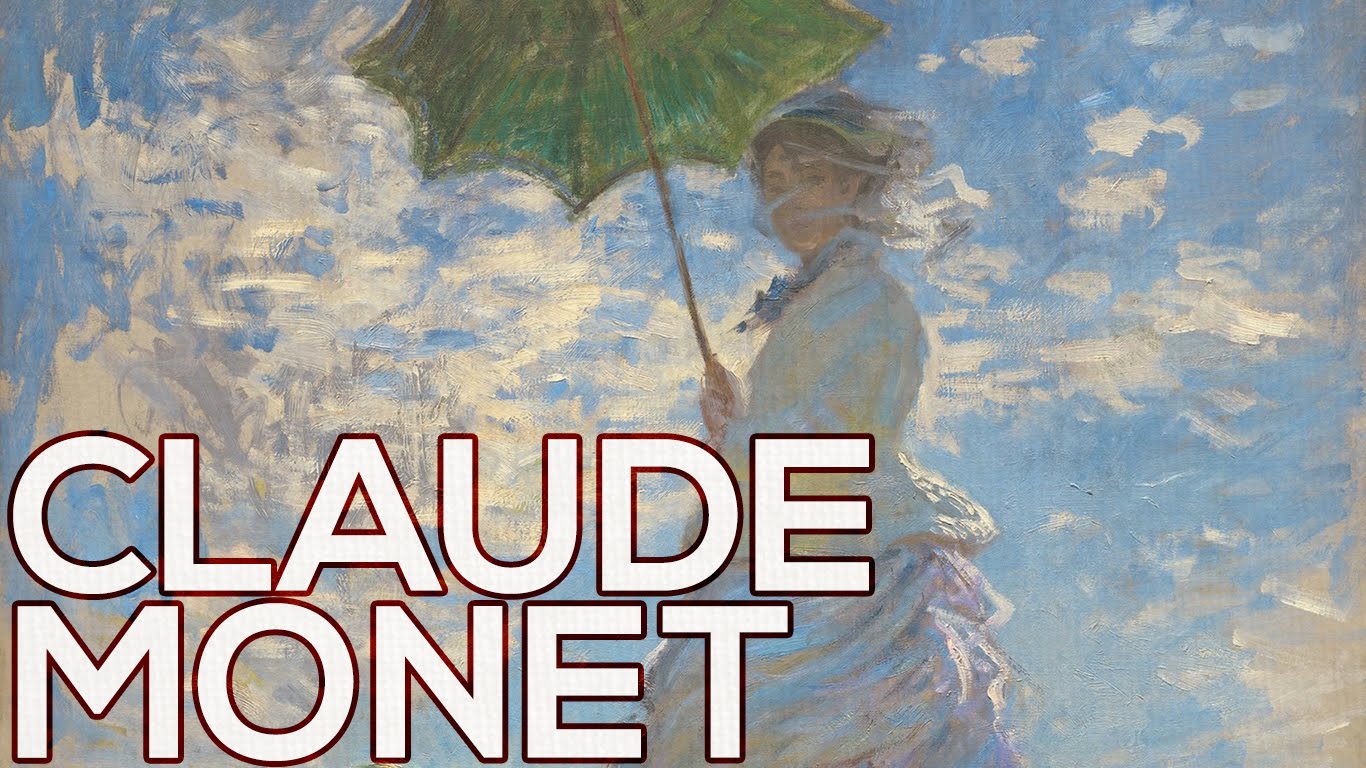 In many ways, Claude Monet is the Impressionist. Throughout his long life – his career being longer than any other painter associated with the group – he devoted himself to a few limited principles, but he developed and refined these until he had exhausted their potentialities. His major aim was to render the optical sensations of nature.

“The only virtue in me is my submission to instinct… Capturing the ephemeral changes of light and atmosphere…are the very essence of painting. The subject doesn’t matter! One instant, one aspect of nature is all that is needed! Perhaps my originality boils down to being a hypersensitive receptor, and to the expediency of a shorthand by means of which I project on canvas, as if on a screen, impressions registered by my retina”

Claude Monet began as a highly talented painter of outdoor scenes, but he ended, some sixty years later, with pictures where the subject was almost lost in a tenuous haze of luminous color, and his canvases became almost completely abstract chromatic inventions. Every painter associated with Impressionism was indebted to Claude Monet. The world also has been greatly refreshed by his joyous, carefree vision of nature, in a stream of canvases which themselves seem to be made of the winds and skies, of mists and sunshine.

The Impressionist painters shared a courageous, unremitting zeal to paint. Hard work is not usually a part of the popular image of the artists’ life in nineteenth-century Paris. The vie de bohème, celebrated in song and story, suggests a program so full of Bacchic revelry and romantic dalliance that little or no time would be left for the pursuit of art .

The immense output of the Impressionist painters and a basic knowledge of their lives reveal the fallacy in such a picturesque image of their existence. Only one element in it reflects a sorry truth – poverty was actually the lot of several of the important painters of the Impressionist movement, and it dogged the early years of Claude Monet. But in spite of the hunger and anxieties to which their poverty gave rise, and in spite of rejection and misunderstanding, which can be more potently discouraging than the pain of an empty stomach, the young artists who staged the great revolution in the history of painting, were conscientious and enthusiastic workers. And none of them worked harder than Claude Monet.

Industrious as a sole end is, of course, stupid and empty. But it cannot be denied that the willingness to try again and again is absolutely necessary to the realization of any artistic ideal. And in Monet’s case the ideal to which he devoted a long life of unflinching effort was an exacting one, to which he alone remained consistently true. For more than sixty years he struggled to express in paint purely visual perceptions – to create pictures that arouse only those sensations which can be experienced by the eye. Increasingly he eliminated all but the pictorial elements, until the names of pictures – Haystacks, Water Lilies – are really only names of motifs, and the true subject of the pictures is light itself.

Intellectual content, comprising literary allusion, drama, and composition, is either so lacking in these typical works, or so subordinated to effects that can be enjoyed only by the sense of sight, that it would be completely impossible to describe a work by Monet to a man born blind. You might be able to convey to him a good deal about a Titian or a Michelangelo, but you could never conjure up for him a picture painted in honor of the subtle tones of light at dusk or dawn.

Many painters before Monet had been preoccupied with the problems of light. But these painters had used light to heighten the drama in their works, or to bring out form. None of them gave it, as Monet did, the freedom and the license to destroy form. It is in this daring to renounce everything else in a picture for the sake of light that Monet’s originality and importance lies – and his right to regarded as the heart and soul of the Impressionist movement.

The word “impression” was used before Monet entered a picture with the title Impression, Sunrise in the first Impressionist Exhibition in 1874. But it was Monet whose picture, received with irritation and derision, provided the epithet by which the entire group of painters was to be permanently tagged. For he had been the prime mover and chief organiser of the audacious and novel exhibition, and it was he alone who continued for the rest of his career to paint in a truly Impressionist style.

Monet’s life up to this point had been varied, difficult, and productive. He was born in 1840 in Paris, but his youth was spent in the seaport of Le Havre, where his father kept a grocery store. In his teens he acquired some local fame as a caricaturist, but he apparently never thought of becoming a painter until 1858 when he met Boudin, who encouraged him and gave him some lessons.

The following year he went to Paris and worked at the Academie Suisse, where there was little or no criticism and instruction, but an excellent opportunity to draw from the nude and to meet other artists. The young Monet’s career at this point, however, was interrupted by his required military service. He spent it in Algiers, but became so ill there that he was discharged before completing his term.

He stayed a short time after his return at home in Le Havre, working with Boudin and Jongkind, but soon obtained his father’s permission to study in Paris. Monet the entered the studio of Gleyre, where he found the instruction of little value, but made friends with Renoir, Sisley, and Bazille, with whom he was to be closely associated for many years. He had met Pissarro some years before.

Although for a time Monet shared Bazille’s studio in Paris, contributed to the Salons of 1865, 1866, and 1868, had many friends among contempory artisits, and occasionally returned to Paris to paint city views, he never became a Parisian. For one thing, he was so poor that he frequently went back home to Le Havre, seeking help which was often denied him. But it is more important to remember that the intense study of nature, to which he very early dedicated himself, as a matter of course took him to the country, and especially to the sea, which attracted him enormously. We find him working in the company of one or another of his friends, on the Channel coast, at Etretat, at Ste. Adresse, and at Trouville, where he came to know Courbet. Or nearer to Paris, in the forest of Fontainebleau, at ville d’Avray, or in Bougival with Renoir.

The three places where Monet established himself for any length of time are all located on the Seine. After his return from a stay in London during the Franco-Prussian war and subsequent visits to Holland, he settled for about four years at Argenteuil. The years from 1878 to 1880 he spent in Vetheuil, a little further away from Paris, but also on the river. Finally in 1883 he moved for the last time, to Giverny, where he lived forty-three years until his death in 1926. This long period at Giverny covered exactly the second half of his eighty-six-year span, a period that brought him wealth and security, happiness, and long overdue recognition and fame.

It is only natural to question and speculate a little about what kind of human being this artist was. Many of the most intimate and humiliating facts about his life are known, because letters begging desperately for the loan of a few hundred francs were kept and have been published. He seems to have had no false pride about poverty, however, nor indeed any great reticence in speaking about the things most serious to him. When his first wife died, he told a friend how in the midst of his grief he had observed in terms of colour the changes that death brought to her face. His own horror at this detachment is perhaps the key to a certain element of inhumanity that we willingly – almost apologetically – attribute to his personality. Certainly nothing in his painting shows him as cold, inhuman, or unemotional. But the very greatness of his art lies in his consistent attitude of objective and searching observation, which he pursued with the disciplined dedication and necessary detachment of a surgeon.

Five years after Monet’s death on the occasion of the great retrospective exhibition at the Orangerie in Paris, Jamot alluded to this apartness with sympathetic understanding: “He had been in his youth a standard bearer and a leader. To be capable of commanding others is to have within oneself a principle of solitude. After years of frightful misery, having attained fortune and glory with no change of heart, he ended his long career as a solitary figure…” Monet’s role of standard bearer and leader of the Impressionist painters, to which Jamot alluded, was summed up by Renoir in a warm-hearted tribute: “Without him, without my dear Monet, who gave courage to everybody, we would have given up!”