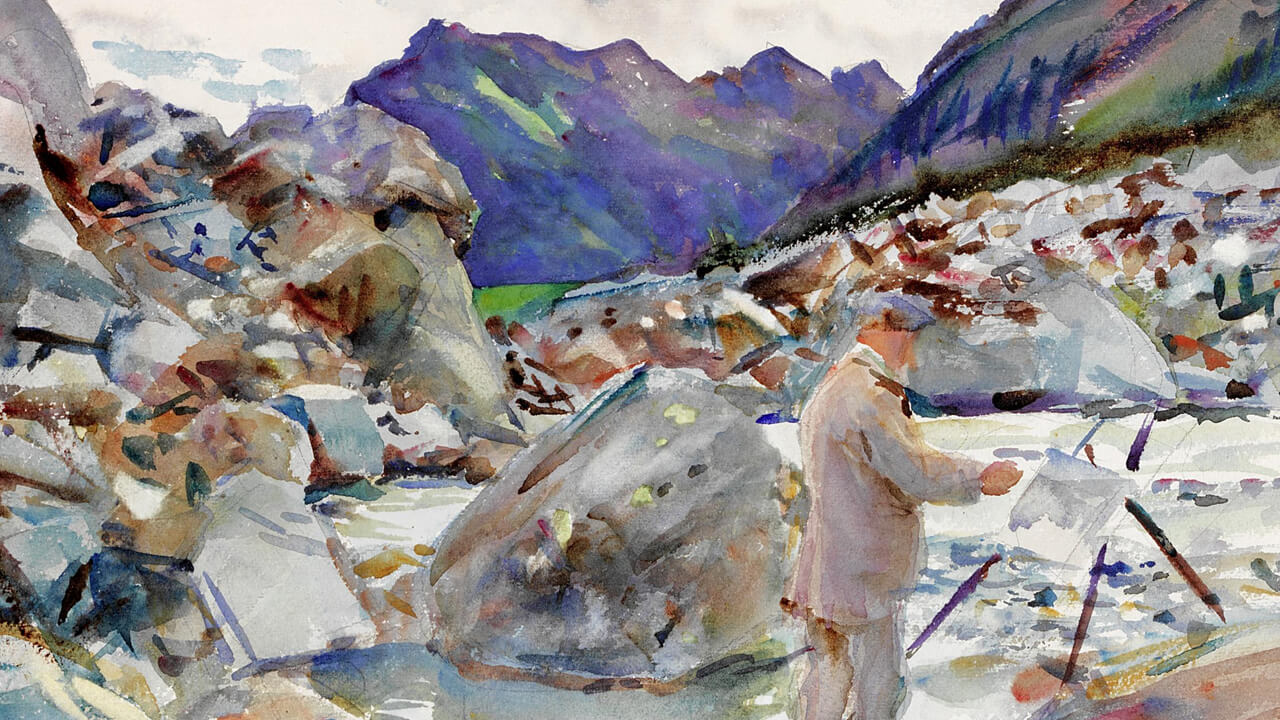 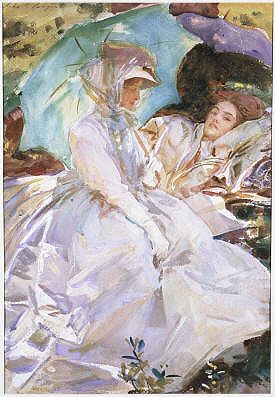 Chemically watercolors are pigments made from ground minerals and dyed inert powder, held together generally with gum arabic made from the acacia tree. Watercolors capture luminosity and offer a range equal to and often exceeding that of other mediums.

Watercolor is transparent yet can be made opaque, either for accent or over the entire surface, through repeated wash applications of pigment on a white ground generally made of paper. It is considered a “Light” painting medium as opposed to other heavy opaque mediums. In this way watercolor’s approach and application is generally opposite or the reverse of Oils and Acrylics in which the entire surface of the ground (paper, canvass, board) is completely, opaquely covered.

Watercolor allows the white of the paper to show through, providing enhanced luminosity, a feeling of light superior to that of other paints. The more water in the wash of pigment, the more the light of the surface comes through. For example, a cobalt Blue will become increasingly light blue as it is thinned by water on the absorbent surface.

History From Ancient Times To The 21st Century

The British dominated watercolor from the 18th century on; currently the U.S. dominates the international watercolor scene. It is known a aquarelle in France and described as painting with water infused pigment on paper. 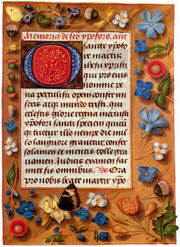 Primitive humans applied water-based pigments with fingers, sticks and whatever was naturally available; their works can be seen in prehistoric cave paintings. These paintings were sometimes drawn with ash, earth/minerals and water. The Egyptians used water based paints to letter and paint on papyrus paper, as well as decorate tombs and public spaces. The ancient Chinese also have a grand tradition of watercolor painted on silk and later on hand-made papers; the Japanese soon followed their lead. The first Chinese water-based paintings were applied with fingers. 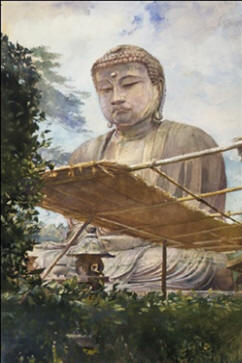 The magnificent tradition fostered in the Far East has many surviving pieces in which the painters incorporated lettering and story telling in most of the works. The Chinese and Japanese production of masterpieces grew suddenly with the advent of hand-made papers around 100 A.D. Techniques blossomed and evolved with the use of papers. Pieces remaining are major works of art.

The Moors brought papermaking to Spain in the 12th century which soon spread to Italy. Two of the oldest paper manufacturers include Arches of France, which opened in 1492 and Fabriano of Italy which opened in 1276. Water based paints became widely used in Europe at that time.

During the Middle Ages, European monks used water-based paints to create elaborately decorated books. These works are considered to be a major art form and were painted on vellum or sheepskin. “The Book of Hours” circa 1415, is considered to be the most famous illuminated book. [Photo British Library Board. All Rights Reserved] 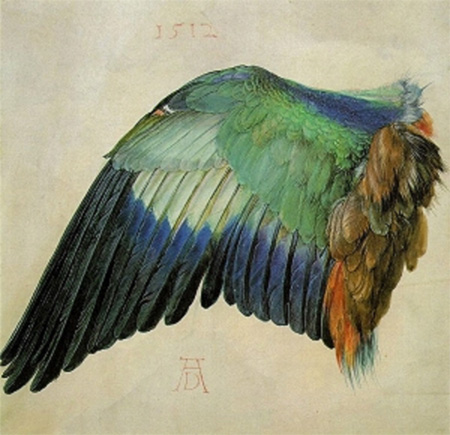 Medieval and Renaissance artists painted frescos with water-based pigments on wet plaster, the most recognizable being Michelangelo’s Sistine Chapel completed in 1512. Albrecht Dürer (German 1471 – 1528) was the first acknowledged master of watercolor. He used complete renderings in the medium as studies for other works; these studies now stand alone as great works of art. Hans Bol (1534-1593) created the first school of watercolor and was heavily influenced by Dürer.

Peter Paul Rubens (1577-1640), known for his voluptuous figures, was also a master watercolorist. Additionally greats like Thomas Gainsborough (1727-1788) and John Constable (1776-1837) were masters of the medium. Watercolor artist Joseph Mallord William (JMW) Turner (1775-1851) experimented in washes and his contemporary, John Sell Cotman is considered one of the finest artists of his generation; his control of the medium is breathtaking.

It was not until the late 18th century that special papers were produced exclusively for watercolor paintings, specially treated and sized. American artists did not emerge on their own until the same time period. In the early 19th century masters like Winslow Homer, James Whistler, John Singer Sargent and Thomas Eakins created works on par with, or greater than the Europeans. LaFarge, also of stained glass fame, was a preeminent watercolorist. 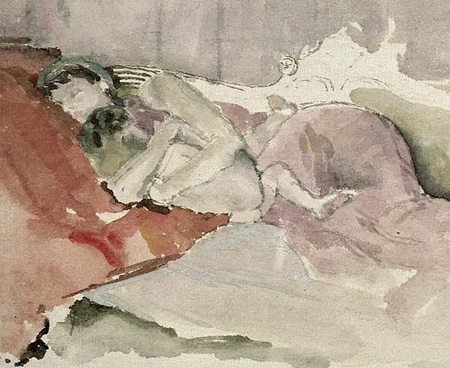 Homer, Sargent and Whistler exceeded the confines of English watercolorists’ works. French painters Honoré Daumier and Eugene Delacroix, better known for his enormous volume of lithographs, are also well known for their remarkable creations in watercolor, Daumier for his satirical political and social works. American born Impressionist Mary Cassatt, famous for her depictions of domestic life, took an active interest in watercolors.

By the late 1870s artists’ societies promoted watercolor, successfully bringing the medium into mainstream America. The American Watercolor Movement of this period paved the way for later watercolorists to be seriously received in exhibition with artists painting in other media.

Botanical artists have traditionally been accomplished watercolor painters. The medium was used by Audubon in his magnificent and detailed paintings of birds, and by many naturalists today. Watercolors are also a preferred medium to illustrate scientific publications. 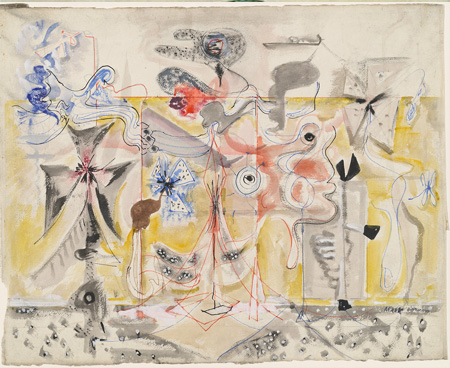 The American artists and their contemporaries embraced watercolor as a primary vehicle, equal to painting in oils. This also became common with major English painters. American artist Mark Rothko (1903-1970) created large canvases with transparent water-based paints which created an atmospheric feel to his works. Additionally Edward Hopper and Charles Burchfield were notable contributors to the medium… and another significant contributor, John Marin, was a proponent of watercolor, the majority of his works being in the medium. During the mid-twentieth century experimentation was the major focus in the American art scene. Watercolor emerged in popularity in those early years, but unlike the large paintings of Abstract Expressionists, watercolors were usually created in a smaller, more intimate format. 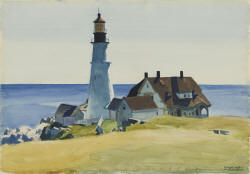 American artists contribution to the watercolor is second to none. They continued to work in watercolors, which lost then gained enormously in popularity with a wide range of creations, continuing the tradition with new and innovative results. Artists Philip Pearlstein, Francesco Clemente and Andrew Wyeth worked in watercolors even during its short lived decline in the Americas. These artists extremely varied body of work cannot be matched anywhere in the World since the English of the late 18th century.